Goblin Beez here and I’m mad!! So listen if you like or walk away! Who needs ya you yella bellied hog monkey! Anyway for those who stayed, I’m Mad!!! And you know why?? Because of the concept of the party face!

Some spoilers for the second campaign of Critical Role

Now for those who don’t know what a “party face” is, well what the hell is wrong with you! But anyway, the party face is the person in a group of adventurers who is the “dedicated talker”, so there don’t say I never did nothing for ya. Well the idea is that the person with the highest Charisma stat in the group is the one that does all the talking and interacting with NPC! Say what!? Not in my house! Okay let me calm down for a second. Okay listen, I get it; the strong guy does all the lifting, the smart one does all the book learning, and the talker does the talking. But lookie here, this is a game about cooperation. Yes, the bard or paladin will most likely have an easier time speaking with people due to “high charisma” I get it okay! But how many players have played a high charisma character but as a person they don’t feel comfortable talking? To the point where they freeze up and suddenly are feeling like they are having a bad time? Don’t get me wrong, yes a high charisma character can be the main talker, sure why not, but do they have to be the only one!?

Let me use two examples using the hit show CRITICAL ROLE. The first character is a high charisma warlock named Fjord who, for a long while, was the talker of the group, the face as it were. But the actor who plays him, Travis Willingham, did something special; he would boost the confidence of other characters and push them forward into uncomfortable circumstances (for the character, not the player) to talk.

Now lookie here, these are all professionals in the field of acting, yeah I get it, but what he did here was step down as the “party face” in order to give other players …the chance to talk. You see what I mean? In the last season as the dumb barbarian he also gave smaller characters the chance to be strong, boosting his fellow players and their characters in the process! Whether they succeed or fail, his character gives them pointers, and they all have a good laugh at the end. Do you see what I mean? Everyone gets to be involved, everyone gets to interact, everyone gets a chance.

Example two! Same show, yeah yeah I know; “Super original Beez” wELL SHUT IT! MY Article, my rules! Anyway, so there was this one tiefling character named Molly. Molly had trash stats in his charisma. But do you know how he acted? This character carried himself with layers of false bravado. Even though he wasn’t the “party face” he would still interact with people as if he were. And yet he gave some of the most insightful outlooks when it came to; the people, the poor, and the state of society. His actions were passed on and carried through with some of the other characters, never forgotten. Molly was the most charismatic uncharismatic character ever.

So we have some examples now of how you can rethink on the concept of the “party face” here are some others. Some people are rubbed the wrong way by super charismatic and overly confident people, that could affect some NPC as well! These kinds of moments can give more soft spokes characters a chance to talk. Or maybe there is a dragon or evil NPC who absolutely detests big flowery talkers! Maybe the most charismatic people have disadvantage in these situations! Maybe they see the strong person in the back who isn’t talking as the only person they want to interact with, the person who understands true strength in their eyes. Or maybe an NPC that is very skittish finds that kind of high charisma character as overwhelming, and they only prefer to talk to other bookish individuals.

As a DM you can introduce these types of characters!! And as a player you can step up or step down when it’s appropriate! Maybe help to give other people a chance. You might be surprised with how many moments it can make, and the bonds it can build. Play it up and have fun!!! 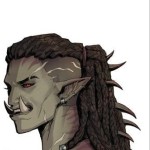