With the recent start of Netflix’s “The Witcher” and the internet going crazy over it, it seems time that we talked about the show’s main protagonist, Geralt of Rivia.

For this build I will be drawing inspiration mainly from The Witcher 3: Wild Hunt, as well as the Netflix series.

So lets jump right into it shall we? We’ll start with Geralt’s race, which is fairly obvious, he is a human. For this build we will be going with the variant human because the extra feat and skill will help get this build going from the beginning. More on that in a minute.

Geralt’s background is also a fairly obvious choice. He grew up away from the world only interacting with other Witchers, and training. To me this says outlander. The outlander is most commonly used as for someone who lives by themselves, but I think it works well enough for someone who lived in only a small group as well.

For our ability scores, we’ll be putting the extra +1 from being a human into Strength, as it is what we will be using for our attacks, and Wisdom. Additionally, the variant human allows us 1 feat. We will be taking Athlete, to give an extra +1 Strength and to drive home that Geralt is a remarkable athlete. With those taken into our account, and using the standard array out scores end up as follows:

The first class level to take for this build is Fighter. The Fighter provides us with a few key aspects of this build. So at 1st level the Fighter gives us two proficiencies, but first the proficiencies granted by our background and race are Athletics, Survival, and Perception, which represents the Witcher’s heightened senses. Good options for what we can choose from the fighter class are History, because Geralt knows a lot about various monsters, and Animal Handling, because he loves his horse.

Of the equipment options for a 1st level fighter, we are going to want to take two longswords, and at some point we’ll want to get one of them silvered. We also get chainmail for free, which is close enough to the armor that Geralt uses, at least in the game.

1st level gives us a Second Wind and a Fighting Style, of which we will choose Great Weapon Fighting.

At 2nd level we will immediately multiclass into Ranger, giving us natural explorer and a favored enemy. It doesn’t really matter what we choose for a favored enemy but I think that the strongest candidate is monstrosities, as most of the monsters the Witcher hunts seem to fit into that category the best.

3rd level gives us another Ranger level and our first spells, along with another Fighting Style. Defense is the best option for that because +1 AC is always nice.

Now it’s time to talk about spells, and more specifically, how the Witcher uses spells. In the game you get 5 signs, Aard, Igni, Yrden, Quen, and Axii. For this build we will want to take the spells that are closest to those 5 signs.

With that in mind the two spells we will take at this level are Entangle, representing Yrden, and Hunter’s Mark, because it’s just a nice thing to have.

4th level has us going back to fighter to pick up action surge.

5th level gets us our Martial Archetype, of which we will pick Eldritch Knight, to help get those signs. The spells we will pick at this level are Thunderwave, representing Aard, Burning Hands, representing Igni, and Charm Person, representing Axii. We also get a couple cantrips and whichever ones of them you want are completely up to you. This level also gives us a Weapon Bond, so you can be sure to never lose your swords.

6th level gets us out first ASI, or more accurately our first feat. We will be taking Magic Initiate and learning Armor of Agathys, representing the final sign, Quen.

7th level is where we choose our Ranger Archetype, and for this build I will be choosing Monster Slayer, but Hunter is also a strong candidate. The Hunter’s Sense ability is a nice thing to have and is definitely a good match for our character. Slayer’s Prey is also a nice damage bonus, and we also pick up Protection from Evil and Good and one other spell, for which I am going to suggest Cure Wounds.

This is where I’m going to leave this build, I think it’s perfect as is, but if you plan on going all the way to level 20 I suggest a Fighter 16 Ranger 4 split, as we already have the key components to a ranger that we want for Geralt, and this way we don’t miss out on any of the Fighter’s extra ASIs and get a third attack each round.

Is there something you would have done differently? Is there anything crucial to Geralt that I missed? Let me know over in the Lichlair forums. And of course, as always, don’t forget to follow us on our social media to never miss out in any of our content. You might be surprised at the next character we take a shot at. 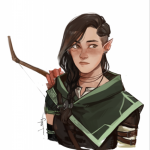